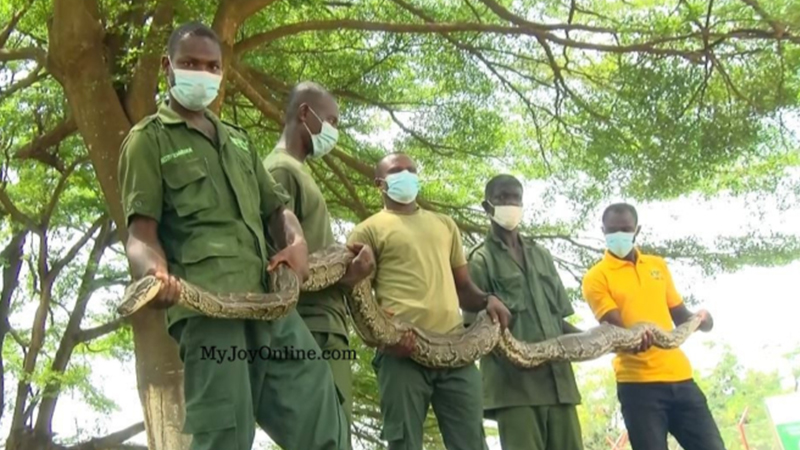 The residents of Ashanti Region’s capital city, Kumasi are reporting rampant invasion of snakes in some residential settlements.

In the past three months, the region is said to have recorded six dangerous snakes; a cobra, royal python, and mostly Africa rock pythons.

At the Kumasi Zoological Gardens, a team leader, Dr Paul Mazeika said the recent Python captured by the team was a six-metre-long Africa Rock Python, hatching its eggs at Brokrom.

“This period we’ve had about six calls, we’ve been able to attend to four of them,” Dr Mazeika revealed.

JoyNews’ Nana Yaw Gyimah reports another Python of similar size was captured at the construction site of the Kejetia market redevelopment project. Though it was non-venomous, experts say it can cause harm to humans.

A Climate Scientist at the Department of Environmental Science at the Kwame Nkrumah University of Science and Technology (KNUST), Prof. Isaac Tetteh explained how the snakes behave.

“The snake has only seen the prey so it will incline the head in that angle in 45 degrees, suite the venom straight into your eyes and attack you,” he said.

Prof Tetteh educated that the non-venomous Pythons resort to their physical power, so they compress you, coil around you and stretch you apart.

He added that the “more you breathe, the more they also stretch to ensure that they cause cessation to your breathing rhythms and they will kill you and swallow you.”

Scientist believes that the destruction of the environment by human activities may have changed conditions of the habitation of the snakes, hence their migration into human settlement.

The Climate Scientist explained deforestation emits many greenhouse gases into the atmosphere thereby trapping heat which is expected to escape into space into human territory so the heat is retained.

“That heat is also being augmented by solar heating from space so that we have the warm climate surrounding the area of where the animals are.

“When it happens like that then as I said every organism has its reed with the ability to have the tremor re-sensors, it senses that there is danger so I should migrate to a different place.”

He, however, opined that filth, aside from climate variation, could also be a factor for snakes migration.

“Without regular dislodging of refuse and transportation to landfilled sites to manage the waste very well, then insects will be there, rodents will also be in the refuse, and when these animals [the snakes] come, they are going to feed on the rodents and when they get the rodent, they see that we have a better place to live so they will prefer living with us [humans].

The two scientists, Prof. Tetteh and Dr Mazeika, both proposed proper waste management and a reversal of environmental distraction to help halt the problem.

“There should be prohibitive, strictly enforced that nobody will touch preserved areas,” Prof Tetteh advised.

“Let’s protect our environment, let’s protect our wildlife, we shouldn’t destroy their habitat. Then coming back specifically to snakes, I would want to say that let’s take waste management very seriously,” Dr Mazeika added.