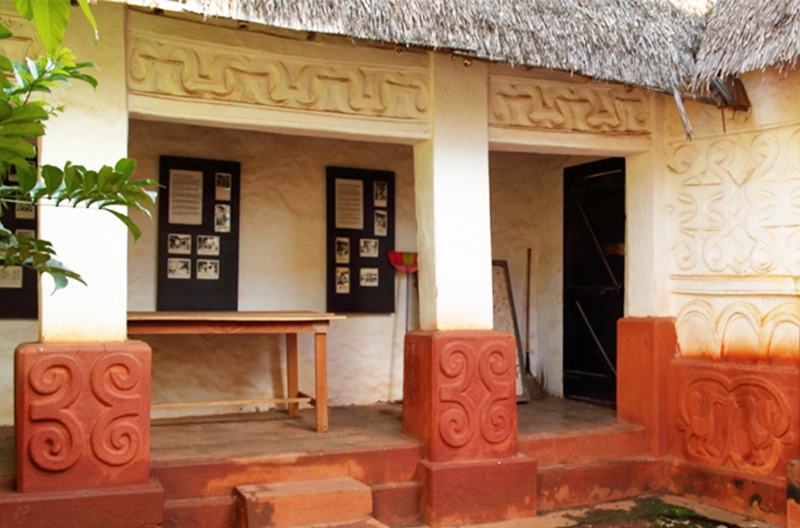 Belonging to the then most powerful and influential kingdom, the late Ashanti queen and warrior, Yaa Asantewaa, consulted the shrine in the last war
with the British.
It was built around 1850, made up of four buildings enclosing a central courtyard three of the buildings are open to the courtyard with raised floors
with one reserved for drummers.
Another by singers who accompany the drumming during religious ceremonies. The third open room was the cooking area where ceremonial meals
were regularly prepared to be partaken by the gods
The fourth and actual building housing the shrine is closed by decorated walls that allow for ventilation and lighting. Another feature of the shrine
house is the Nyamedua, the altar for the sky god where sacrificial offerings are deposited.
The shrine house is on the world heritage list as rare surviving examples of a significant traditional architectural design. The buildings were
constructed in the wattle and daub form
First, a timber framework made of vertical timber posts linked together by horizontal members was constructed around a mud platform.
This was then plastered from both sides with clay. The resulting walls had a thickness of about 25cm. A striking characteristic of the house was the
high steep pitched roofs often with angles of 60 degrees and more which allowed for very good efficiency and durability of the thatch roof
The front basement of the raised floors is generally covered with carvings of various forms and symbols
The need to conserve the remaining examples of Asante traditional architecture was recognized in the 1950s.
In 1972, they were declared national monuments. The last major conservation works were carried out in the late ’60s and 70’s by the public work
department
At Besease where the shrine has just been restored, one has the chance to get an impression of architecture as it was in the early 19th century.