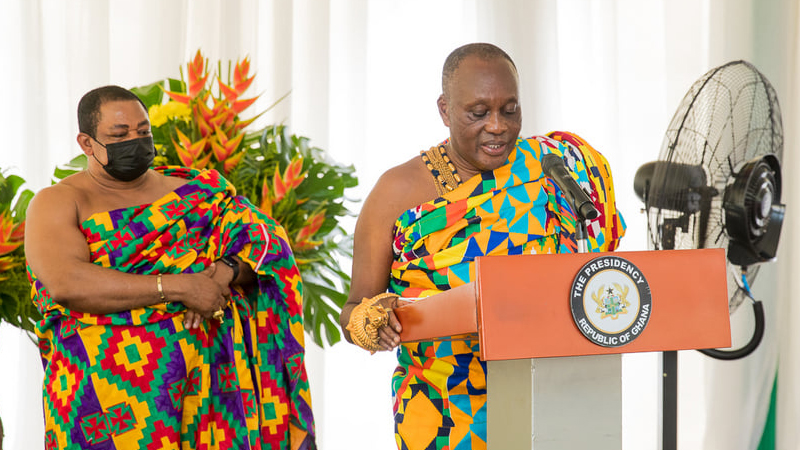 The Omanhene of Asante Juaben, Nana Otuo Siriboe II, has been re-elected the Chairman of the Council of State for the second term of President Nana Addo Dankwa Akufo-Addo.
At its maiden meeting held at the Accra International Conference Centre yesterday, Nana Otuo Siriboe was nominated by Mr Sam Okudzeto and was seconded by 10 other members, leading to his unanimous election.

The act among other things provides for the establishment of a secretariat and other relevant structures for the attainment of the mandate of the council.

Nana Otuo Siriboe was a member of the Council of State in the administration of President John Agyekum Kufuor from 2001 to 2009 and was unanimously elected as Chairman of the seventh council under President Akufo-Addo.

Speaking after his re-election, Nana Otuo Siriboe thanked his colleagues for the confidence reposed in him and gave an assurance that he would provide an avenue for consensus building and quality leadership that would help the council in executing its mandate.

Nana has a record of long service to the nation. He was a key member of the Constituent Assembly of 1979 and the Consultative Assembly of 1992 which drafted the 1979 and 1992 Republican Constitutions respectively.

He once chaired the Komfo Anokye Teaching Hospital Board, and the Kwame Nkrumah University of Science and Technology (KNUST) Council.

He has also served as a member of several other Boards including the Lands Commission, the Ghana Trade Fair Authority, the Prisons Service Council and Anglogold Ashanti.

In private life Nana Otuo Siriboe has been a farmer and an industrialist. In 2015 he was adjudged the best large-scale oil palm farmer in Ghana.

The waste products of the operations of the company, viz. palm fibre, empty fruit bunches and palm shells are converted into electricity for the factory’s operations.

Again, in 2007, the Government of Ghana conferred on him the Order of the Star of Ghana, the highest award the nation bestows on its citizens who have distinguished themselves in their respective fields of endeavour and have made profound contributions to the progress of the nation.