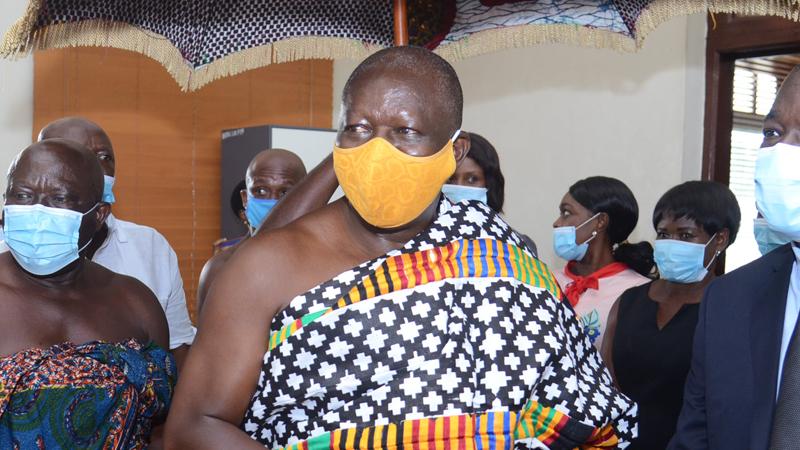 Asantehene Otumfuo Osei Tutu II has intervened for the immediate commencement of works on the 12-year-old abandoned Krofrom Market in Kumasi in the Ashanti Region.

The first phase of the project, which is set to begin in February, will see to its completion in six months at a cost of 60 million Ghana Cedis from the Fidelity Bank Ltd with Asantehene’s royalty as collateral.

This follows Akoma FM’s GhanAkoma extensive report on the abandoned Krofrom Market since the beginning of 2021 as part of the station’s campaign to ensure duty bearers decongest the central business district for the free flow of human and vehicular movement and also restore the metropolis to its past glory as the “Garden City”.

The Overlord of the Kingdom, Otumfuo Osei Tutu II in collaboration with the Akufo-Addo-led government has fast-tracked a pending plan to complete the project to benefit over 8,000 traders in the metropolis.

Ahead of the official start of the project, Manhyia Palace led by the Chief of Amoaman and the Vice Chairman of the Kumasi City Market, Nana Agyenim Boateng I, representing Asantehene has begun a traders’ sensitization programme dubbed: “Let the People Know” to orient stakeholders especially traders, drivers and opinion leaders on the appropriate roadmap ahead of the successful completion of the facility.

Nana Agyenim Boateng told 3news.com that “the King is bent on ensuring better living standards for his people and redeveloping the Krofrom market has been high on the drawing board, so we are here to take stakeholders through the various stages of the project and its specifications to get the buy-in of the people to ensure participatory development”.

Nana Agyenim Boateng assured all traders who were occupying the facility before its demolishing in 2008 for the appropriate consideration and attention when completed.

In a separate meeting with Kejetia-Central Market traders as part of the Asantehene’s Let the People Know campaign, traders at the new Kejetia and the Central Business District of the city including drivers, government officials and other relevant stakeholders were called upon to help make way for the construction of the second phase of the Central Market, which has delayed for almost two years.

Traders, who were beaming with smiles and full of gratitude, extended their praises to the Overlord for a timely intervention in the stalled project which is now a ‘white elephant’ serving as a den for criminals.

Traders in the metropolis since last year have taken over pavements, vehicular ways and every available space to trade creating serious congestion in the midst of the deadly pandemic Covid-19.