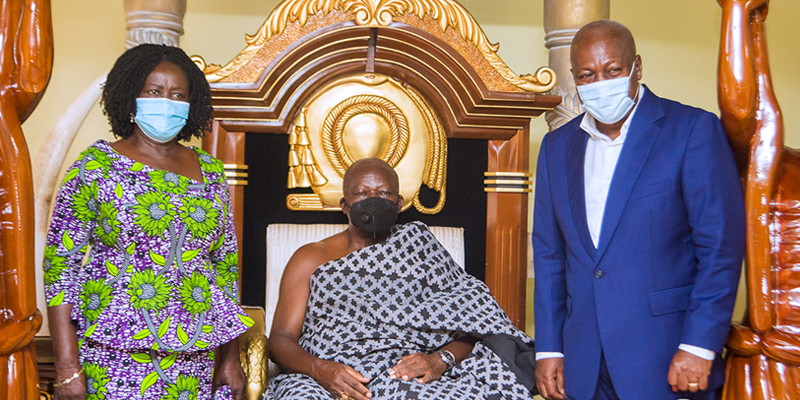 Asantehene Otumfuo Osei Tutu II has advised the flagbearer of the main opposition National Democratic Congress (NDC), Mr John Mahama, to clearly explain to Ghanaians what he did in office as President and what he intends to do when given the nod again.

The Asante monarch said President Akufo-Addo has been touring the country explaining to Ghanaians what he has done and why they should give him another term and, therefore, wants the former President to do the same.

Otumfuo Osei Tutu II also urged Mr Mahama to explain well to Ghanaians what has been alleged he could not do when he was in office but knows he did.

This, the Asantehene said, will help Ghanaians make a choice between him and the President in the upcoming general elections.

The Asantehene made the comments when Mr Mahama introduced his running mate, Prof Naana Jane Opoku-Agyemang to him at the Manhyia palace today, Wednesday, 26 August 2020.

Otumfuo also reminded the former president to rectify some mistakes that made him lose the 2016 general elections “as he was angrily and hungrily voted out by Ghanaians.”

He, therefore, called on the former President to correct those