Born in 1963 at Besease, Father was one of nine children who lived a most humble life with his mother, who raised the children alone after his dad’s death in 1972, when Father Attah-Nsiah was just 9 years old. Many graces accompanied the large family beginning with Father Attah-Nsiah’s mother raising the children Catholic as his father wished, even though she herself was Methodist. As they became young men, the expectation and responsibility for the boys in his family was to assist all the other children (and relatives) continue their education.  It was no small effort, and without his family’s blessing (for several years), that Father Attah-Nsiah persevered in following the call he felt God had given him. 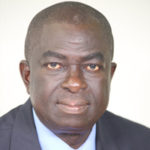